We don’t know yet which route we will take. It could either be the easier and somewhat shorter route via the Azores, or the more challenging and a bit longer route via the east coast of the US, Canada and Iceland. Both routes have their own advantages and disadvantages, which we are currently exploring. We will probably make the decision just before we leave, when we have more information about the status of icebergs this year. With an exceptional iceberg season they might not have melted at the time we make the crossing from Newfoundland to Iceland. Who knows after an extremely cold and snowy winter and currently an exceptionally warm period in Greenland? We will keep you up to date about our plans. 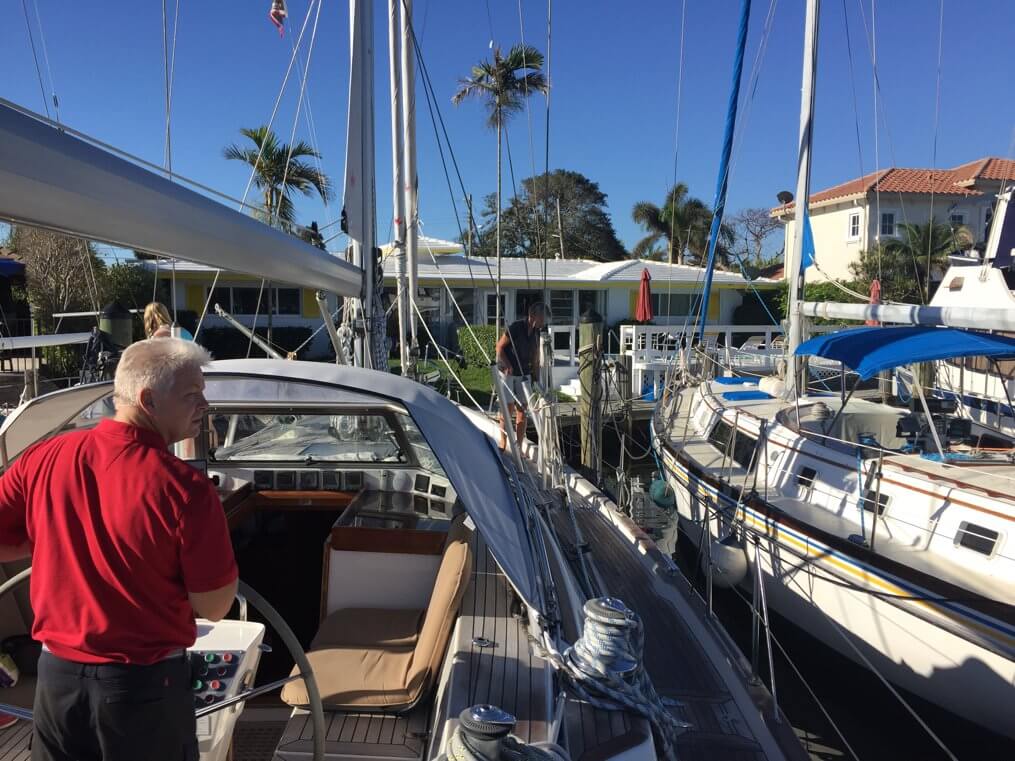 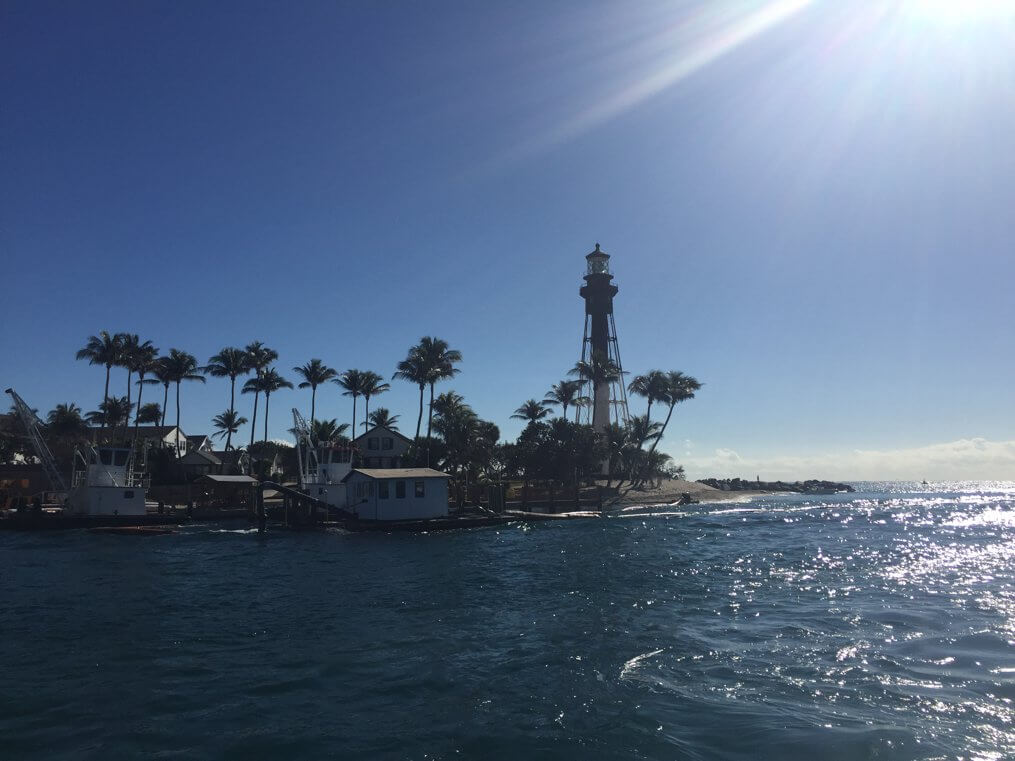 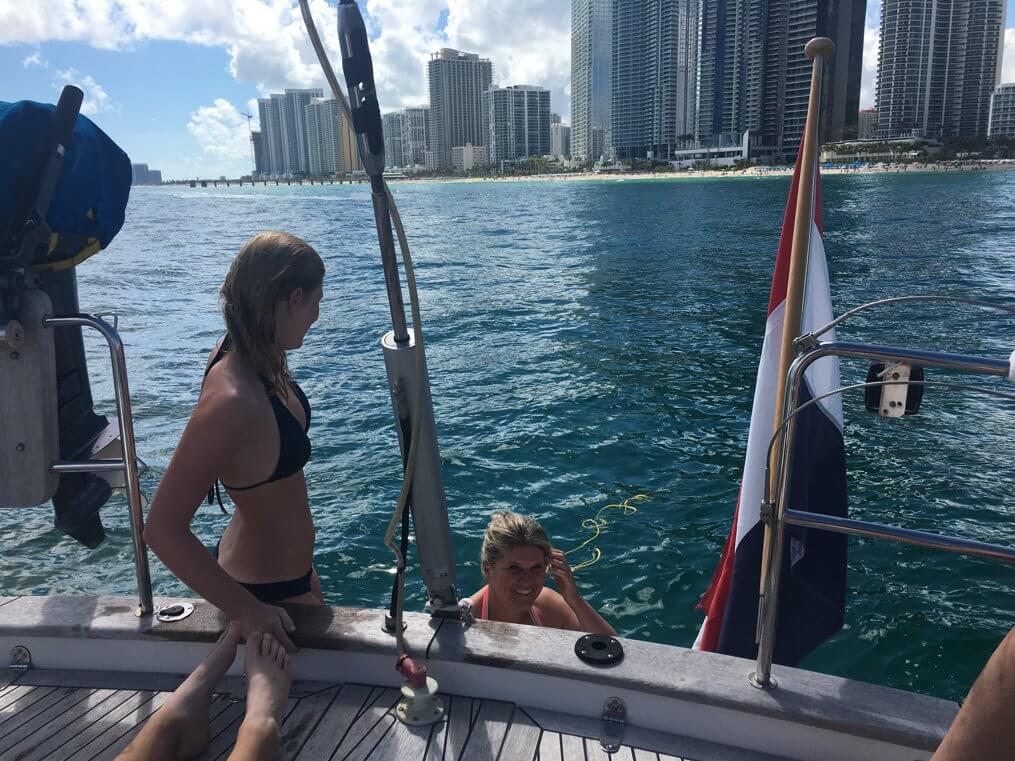 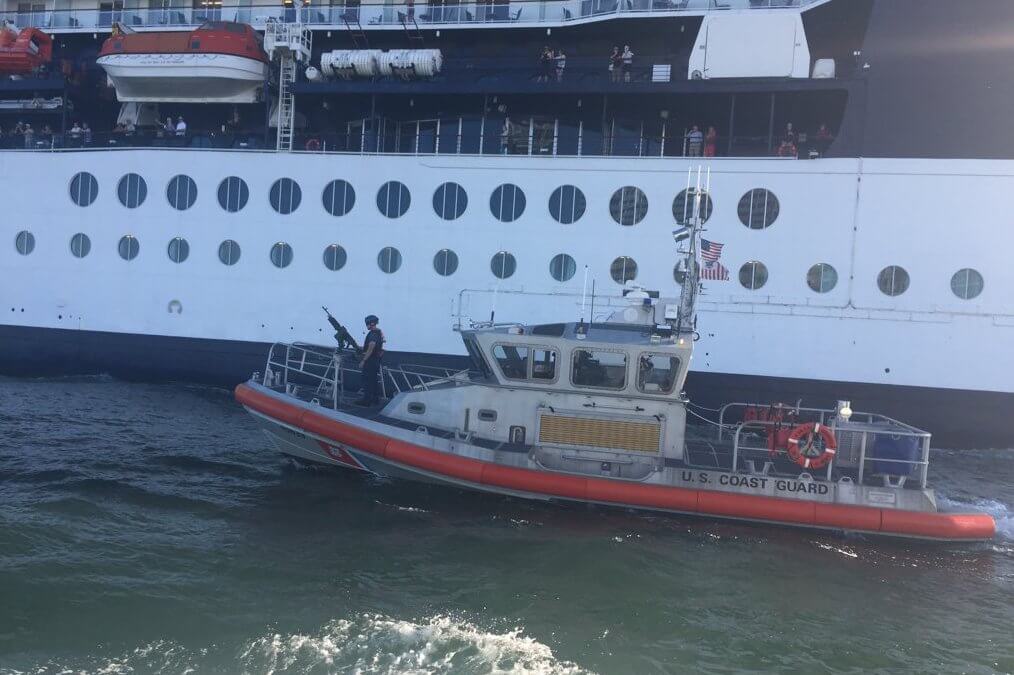 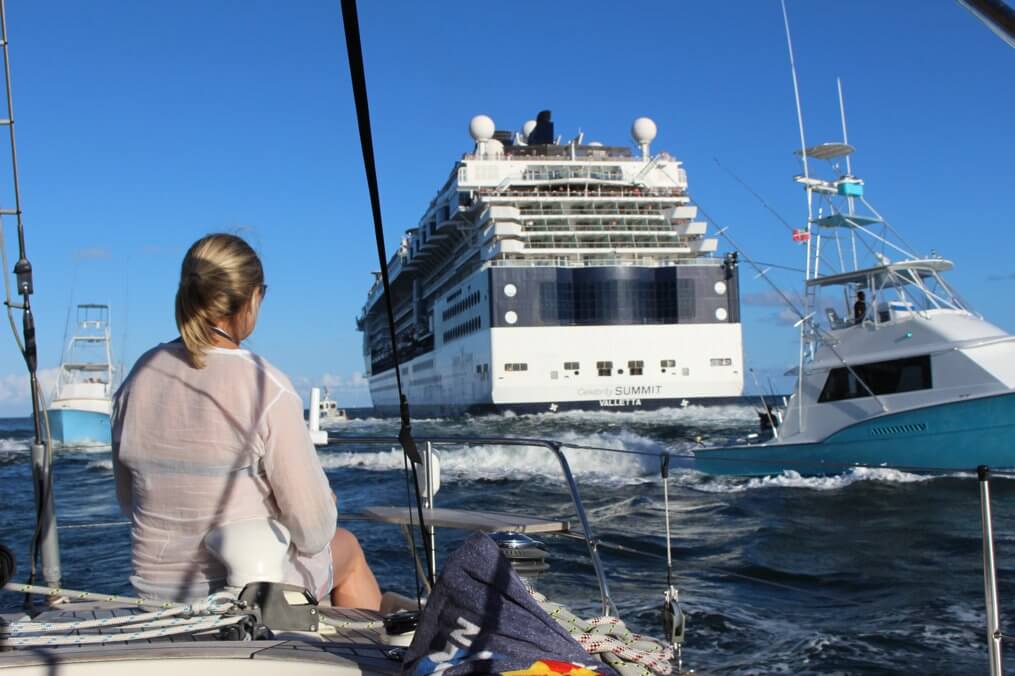 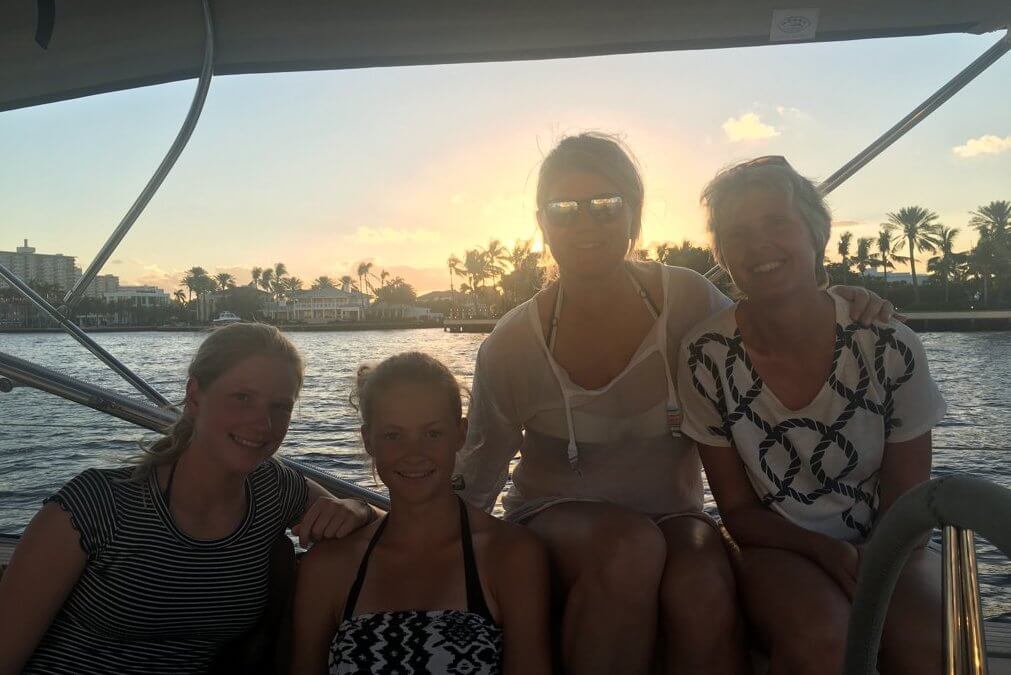 In the meantime we are enjoying the warm and sunny Florida weather. We had a very nice week with Madeleine. The first weekend with Toine and the rest of the week just us ‘girls’. On Saturday we made a nice sailing trip to Miami Beach, planned perfectly leaving and arriving around high tide. On the way south to Miami Beach we sailed on the ocean, anchoring in front of Miami Beach for a swim. On the way back we took the ICW meeting some spectacular Cruise ships just leaving Fort Lauderdale when we sailed in. One Cruise ship was very close to us with a small guard boat with tough men with big rifles protecting the outbound Cruise ship. A rather chaotic inbound sail.

On Sunday we visited the Everglades for an airboat tour. A very exciting tour, especially when the airboat got stuck on a mudflat midway the tour and there is no way the guide can get it off. He asked us (16 people in total) to step outside the boat in order to lose some weight. Kind of scary to step in the warm water and deep mud in a swamp with alligators, snakes, etc 😟. Also a rather irresponsible action of the guide, we think afterwards. Anyway, we survived! Stepping out didn’t help and a little later we were rescued by two smaller airboats, leaving the other boat behind. What an adventure. In the late afternoon we drove to Miami, went out for dinner at the Outback and dropped Toine off at Miami Airport. 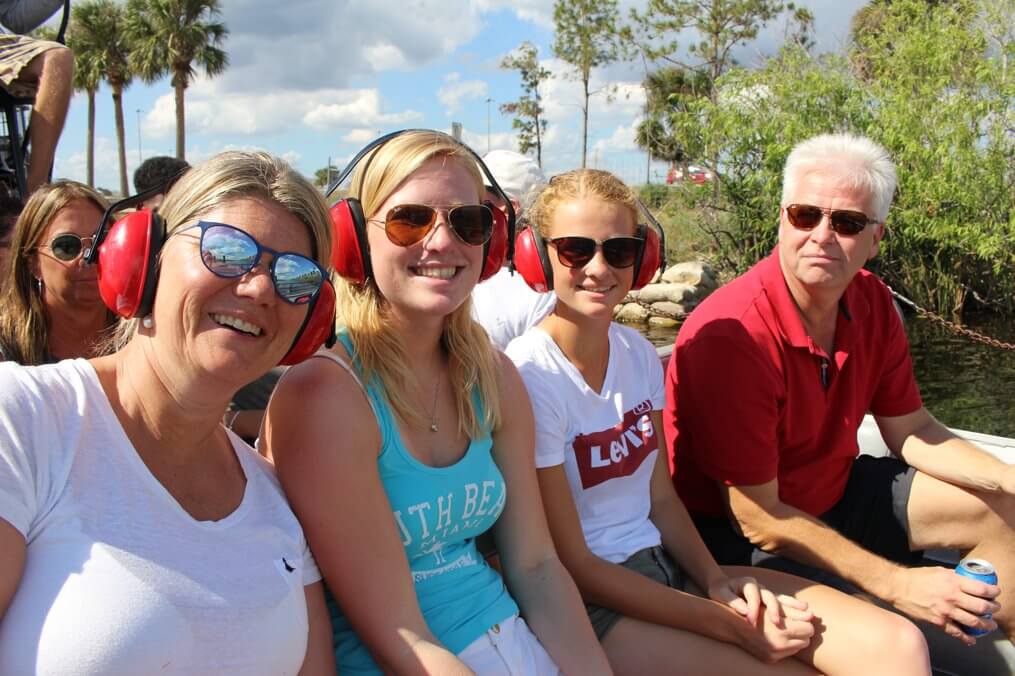 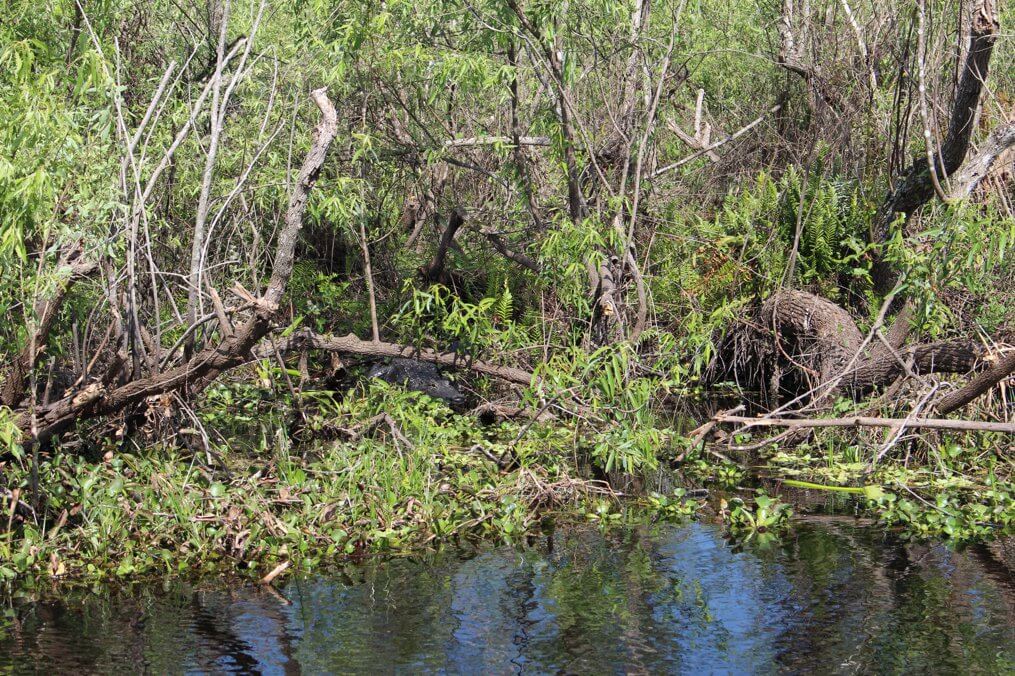 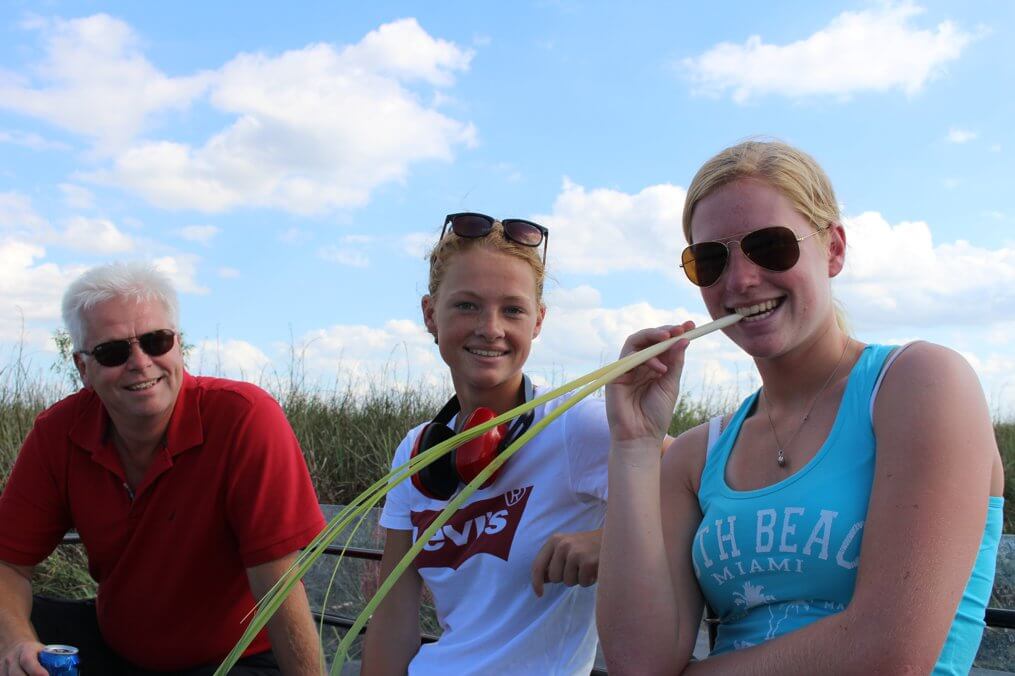 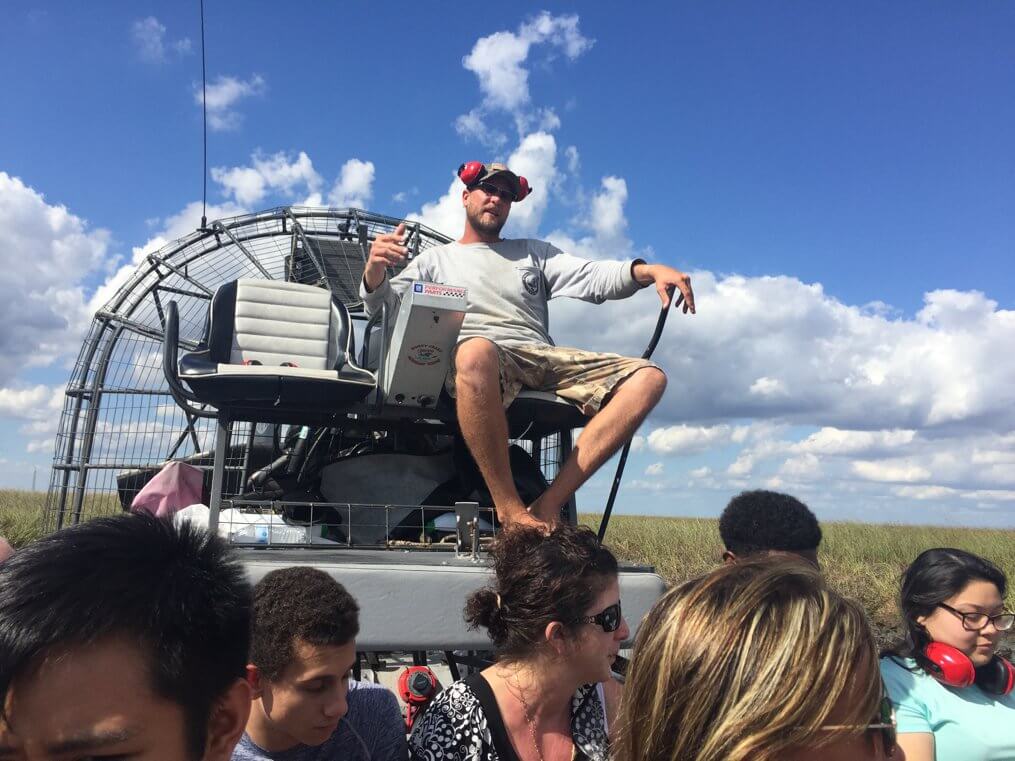 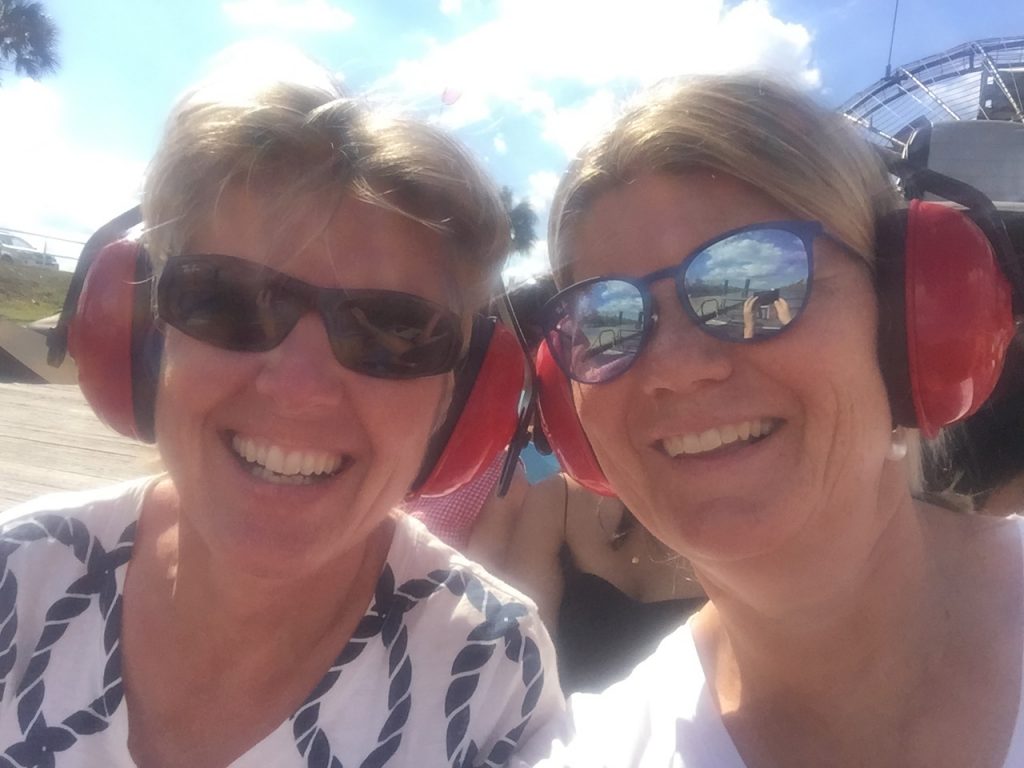 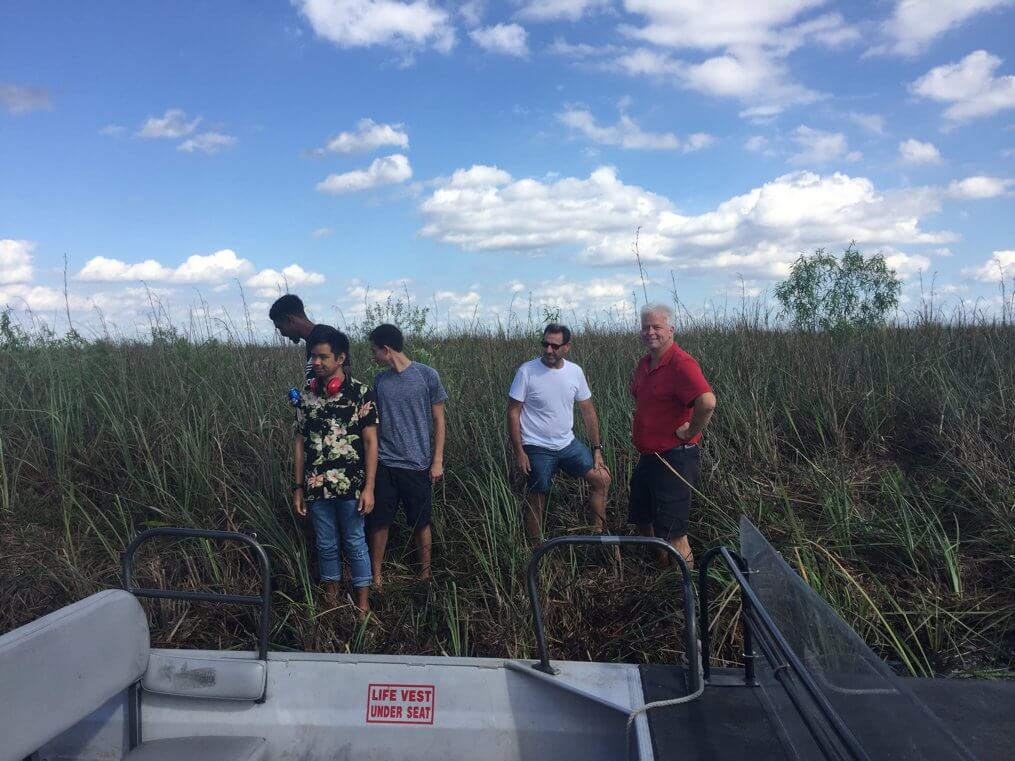 The days following with just the girls were a lot of fun.Very relaxing days watching tennis, shopping for clothes, walking, biking, swimming and having lots of nice talks. Very relaxing except for the one walk we made in Spanish River Park encountering two black snakes on our path. I don’t like snakes, although they are not so big and probably harmless. They also crawl around in our garden and this week I have seen one for the second time. On Wednesday Eline and Marinthe skipped school and we went shopping in West Palm Beach, and in the evening we went to the movies. On Thursday night we went out for dinner at Houstons (along the ICW), and on Friday Marinthe and I brought Madeleine to Miami Airport. We look back on a very nice week! 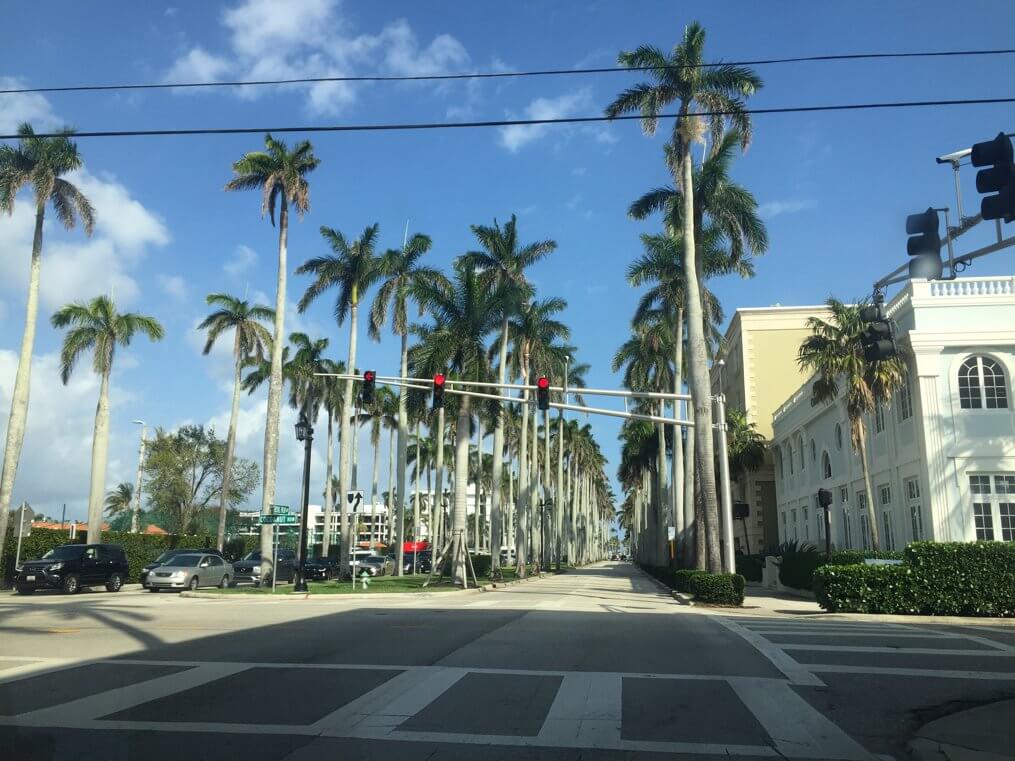 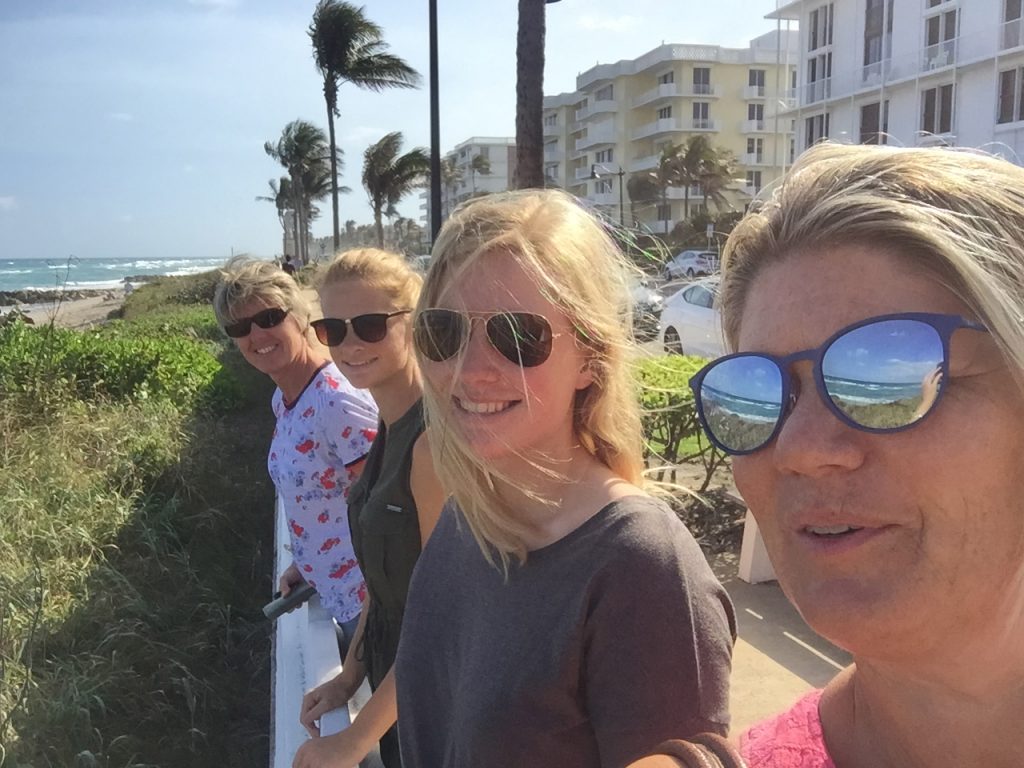 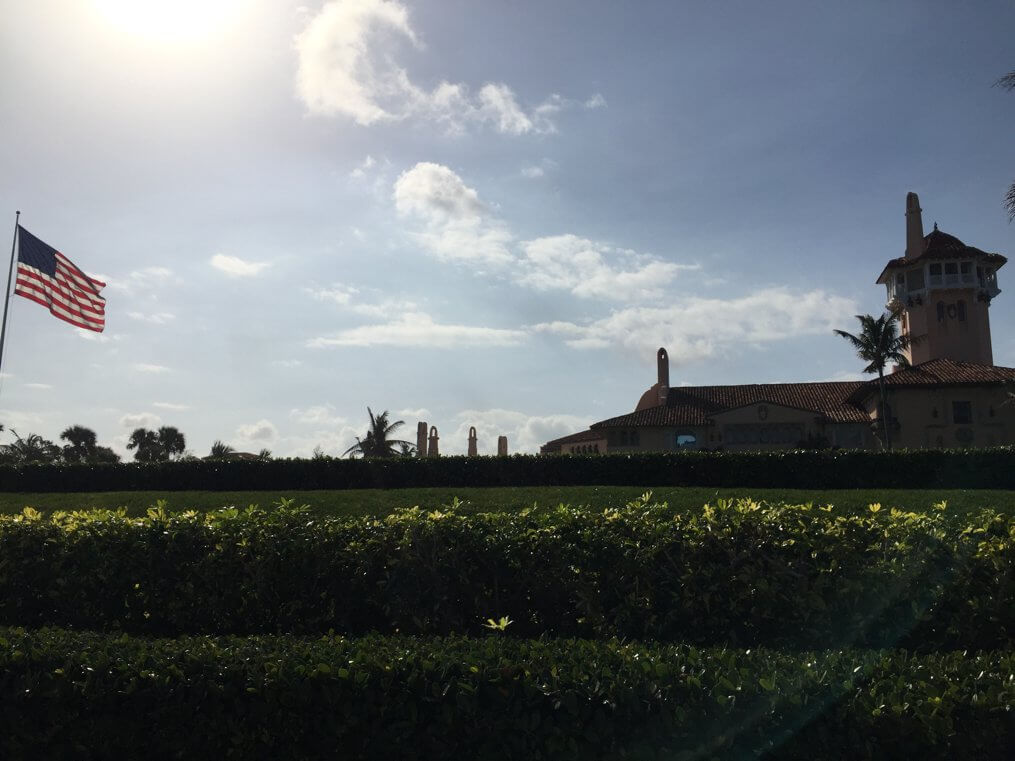 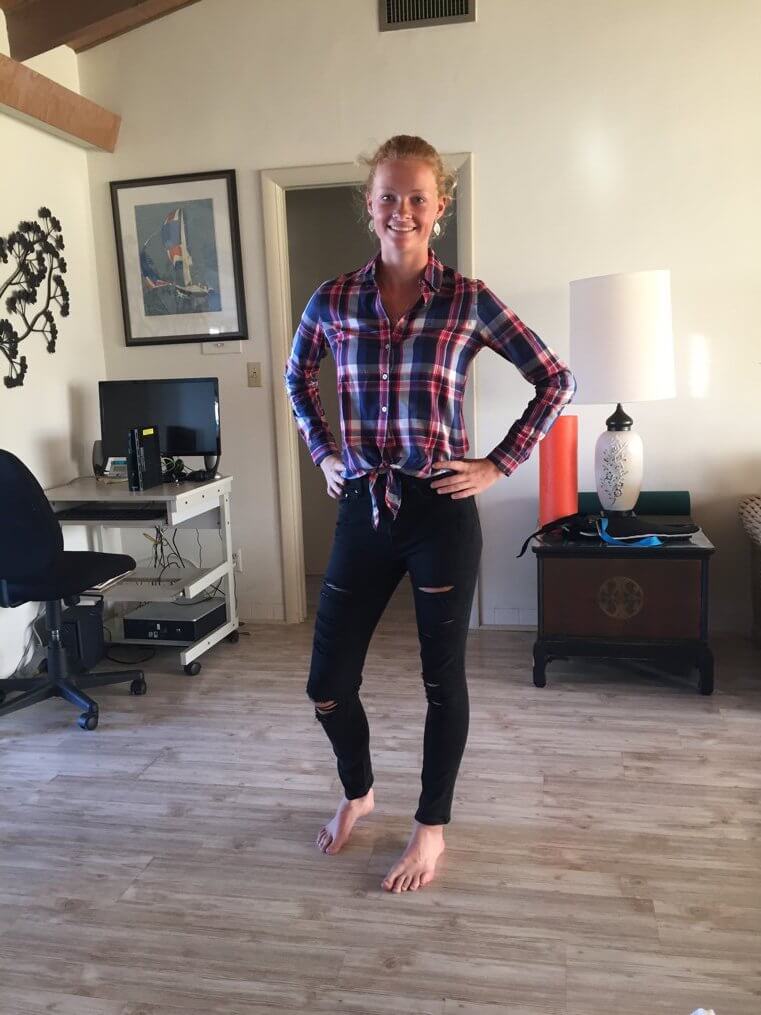 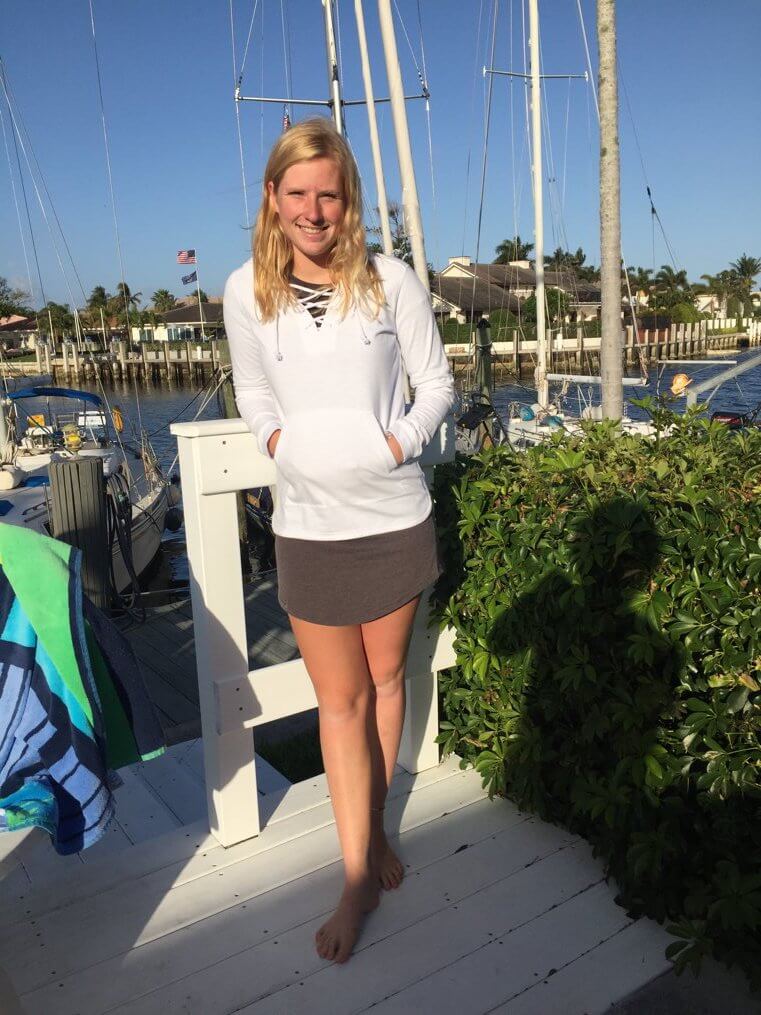 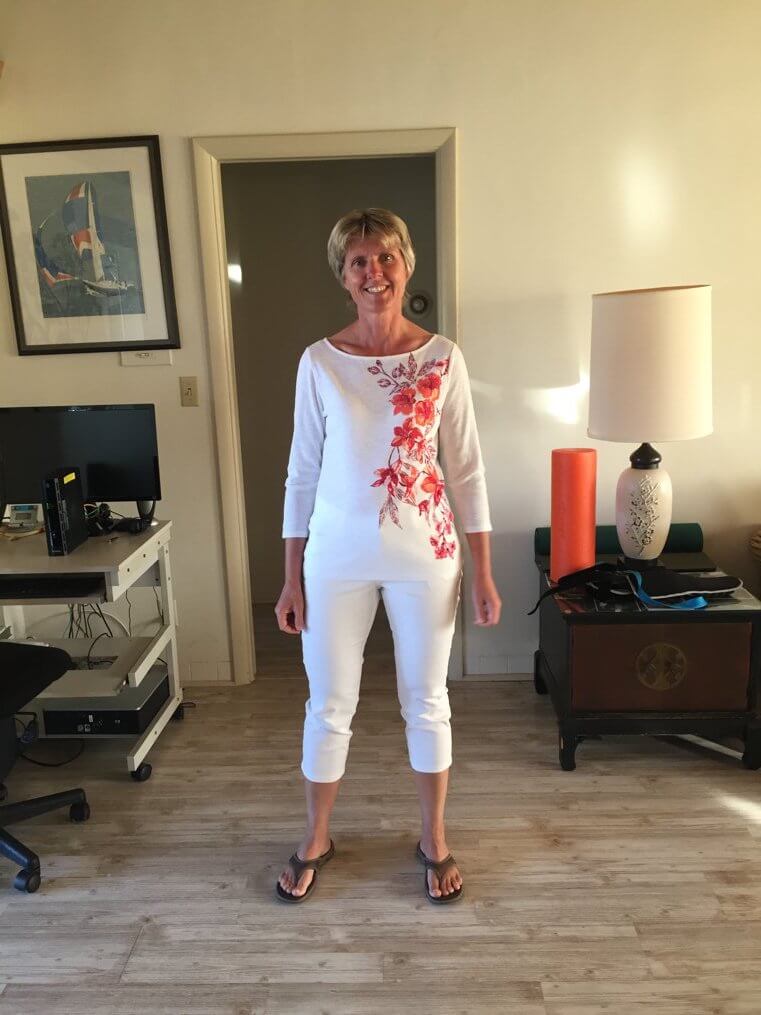 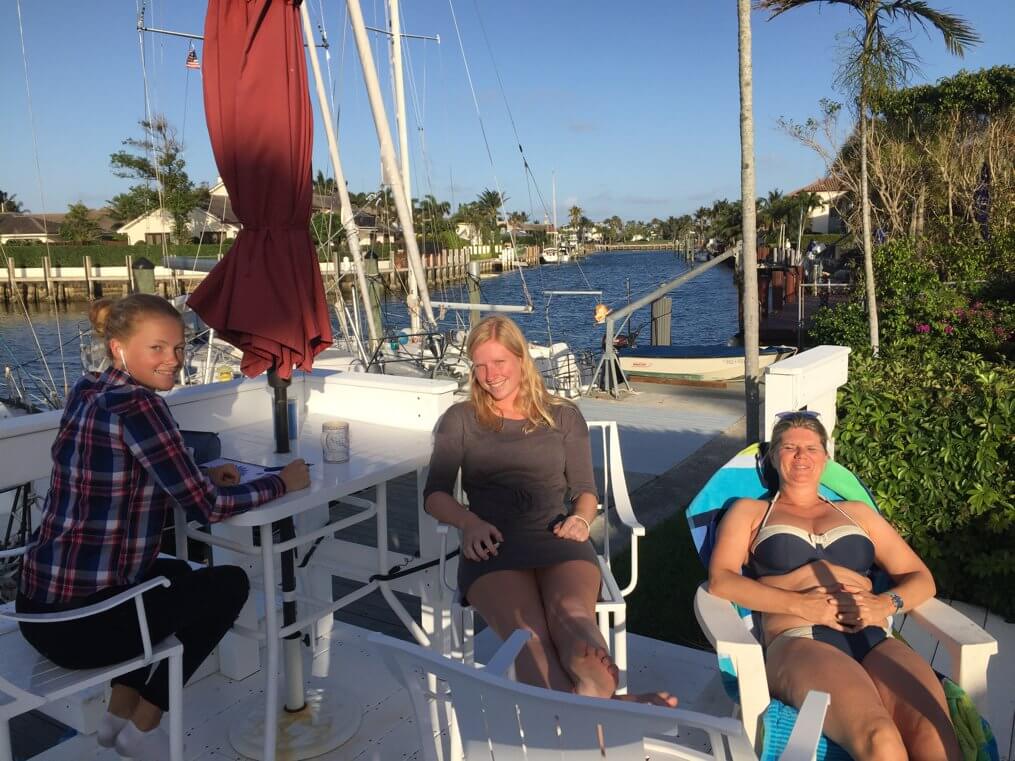 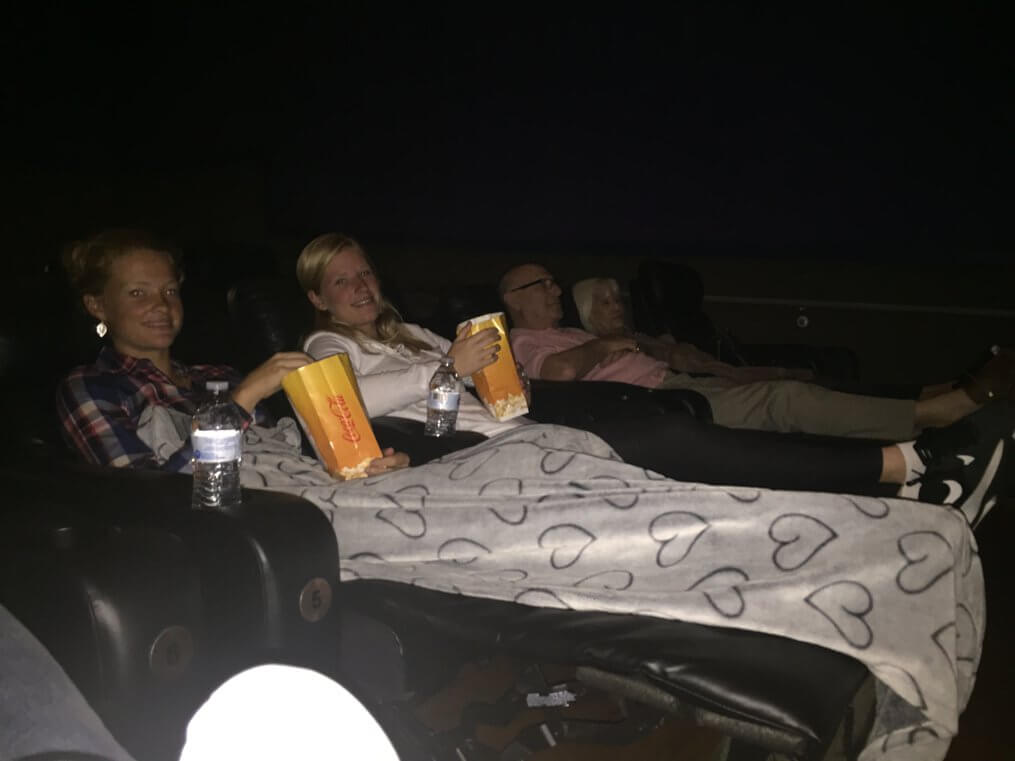 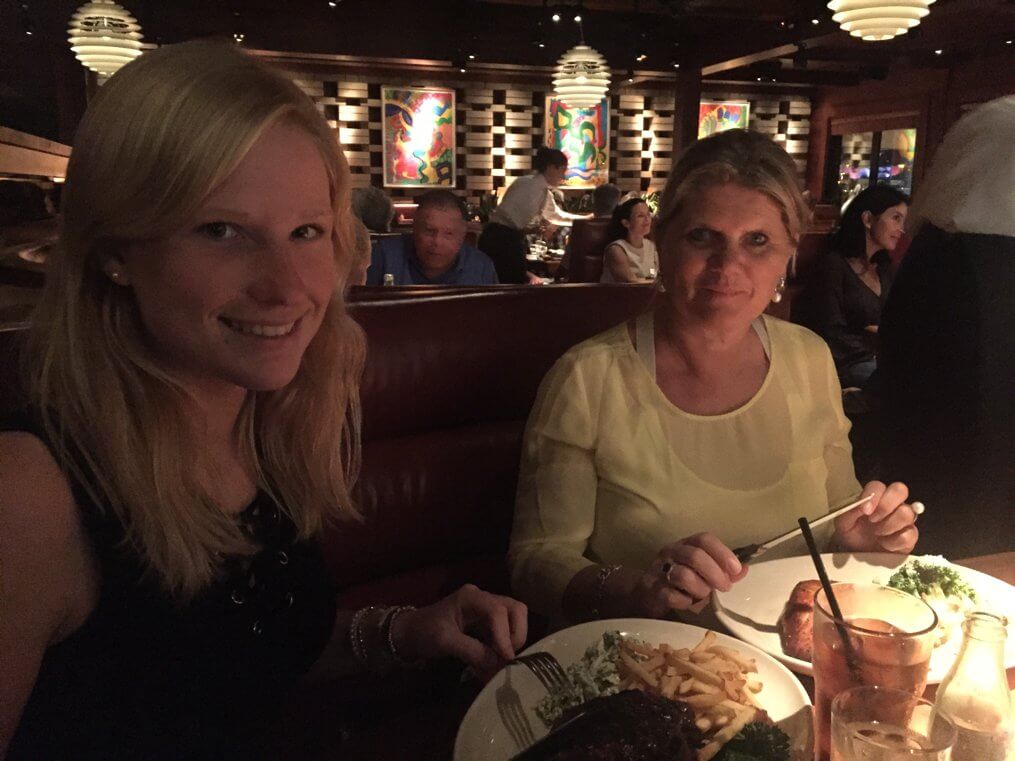 Toine had a busy week in The Netherlands with a full schedule meeting partners and customers. He is currently rather busy with a number of different assignments, a few of them in the European region. So in the coming weeks, he will travel to Europe more often. Luckily, he likes flying 😉.

The aftermath of the school shooting still has a lot of impact. For the first time, there seems to be a turnaround in the USA in the thinking about weapons. But it is a very delicate subject in this country. Even the correction of a strange regulation that you can’t buy a gun untill you are 21, but you can buy a AR-15 rifle at the age of 18! They talk a lot about it in Eline’s school, there was also a walk-out as a protest. One of the students in my English class knows three families who have lost their child. So much grief. Excellent that students are protesting, asking for a change and that the news keeps covering this story in the headlines. Amazing how much influence the National Rifle Association (NRA) has. Hopefully something will change in this country, and in this state. 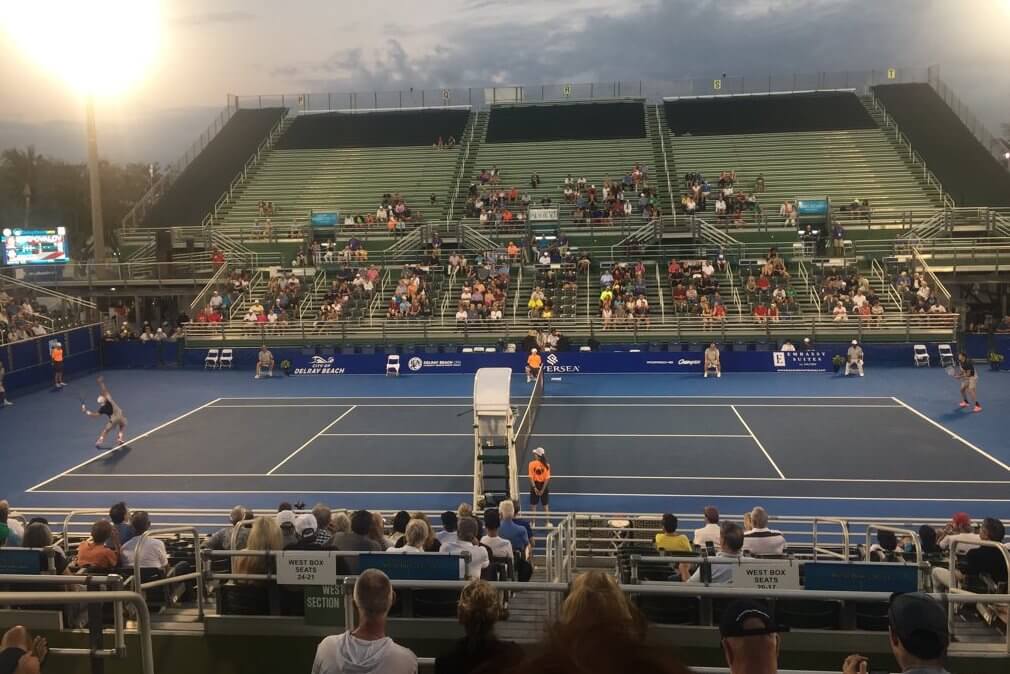 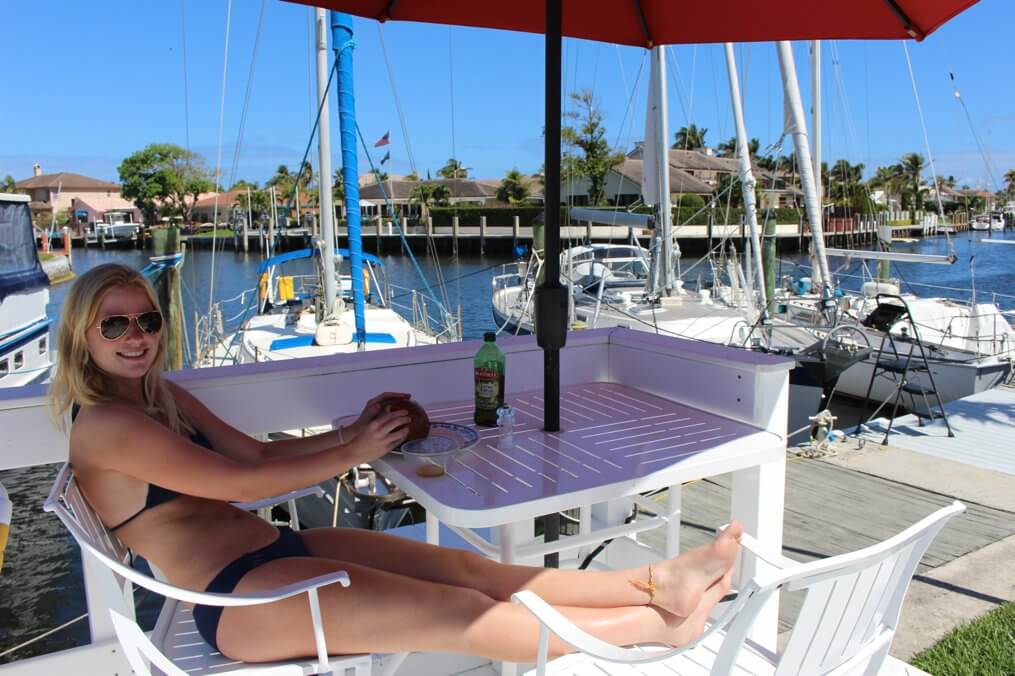 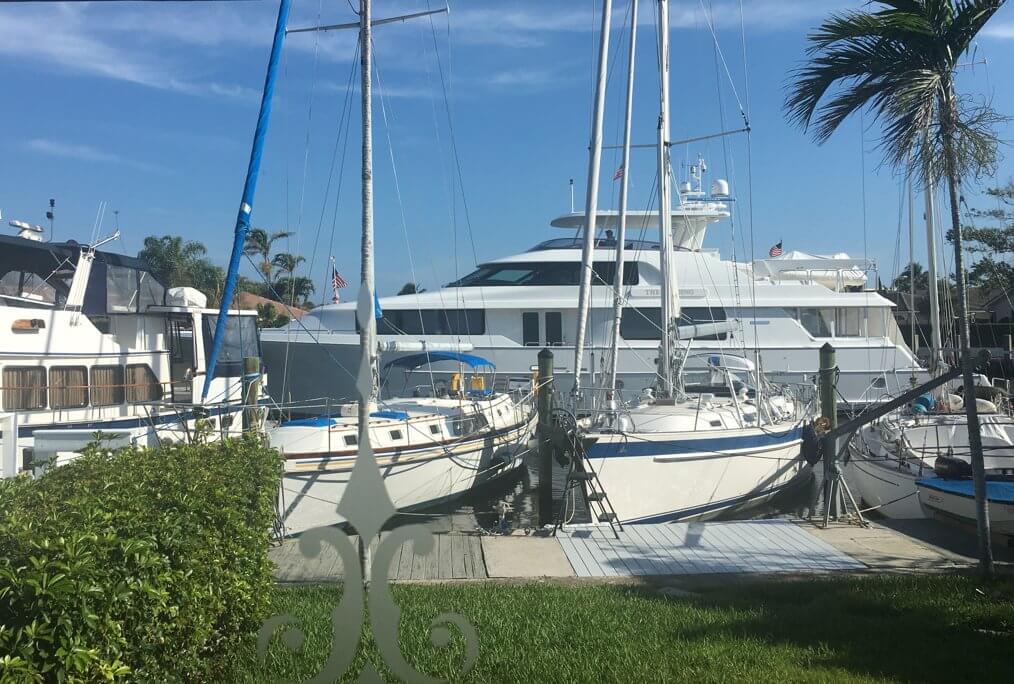 I have decided to continue my English classes. In a new class with fewer students and more hours, with focus on reading and writing on an academic level for TOEFL test preparation. It keeps me occupied in a useful and challenging way from Mon-Thurs in the mornings until 1.30 PM, with also two gym classes on Tuesday and Thursday during lunch. This schedule works fine in combination with Toine working from home (and making a lot of phone calls mostly in the mornings) or being away travelling.

This Sunday Jack is coming down to Florida and is staying for 10 days to work on his boat. Jackie is staying in Canada finishing the skiing season. The coming two weekends Marinthe is participating in two tennis tournaments. Two more weeks to go until the girls have their Springbreak (a week off from school). We have booked flights to spend this week on the westcoast of the US, flying to Las Vegas on March 15th and flying back from San Francisco on March 25th. Lot’s of nice things to look forward to! Live is good 👍.